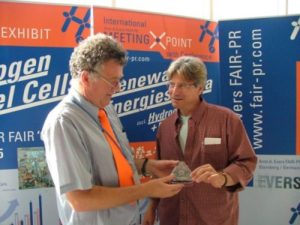 Solar generated hydrogen fuel and electricity has become a reality; Enough to supply cities the size of Los Angeles and Houston. Will Cutting-Edge Televison-Education and Breakthrough Energy Technology join forces to save the Earth? “Solar Tower™ Turbine Cluster Villages” represent the very best alternative energy generation for the immediate and foreseeable future.”
by Henry Alfred Goolsbee

Middle school students all across America and around the world are energized about phrases like “sustainable future”, “solar power” and “hydrogen economy” and thanks to the educational initiative sponsored by Touchstone Energy Cooperatives, in partnership with Discovery Channel School, provider of educational materials to schools nationwide, they may be able to apply these terms in real life instances in the near future.

“Solar Tower™ Renewable Energy Alliance of America” (aka The STREAM Coop http://solartower.coop) has recommended that the “Get Charged! ” program, launched in February 2003 in middle schools throughout America, be expanded to include exploratory documentaries about the future of “Solar Tower Turbine Clusters™” and the many benefits associated with “Solar Tower™ Turbine Cluster Villages.” The programs envisioned would be designed to answer basic questions about hydrogen fuel generated from “green” solar powered electricity – and why “Solar Tower™ Turbine Cluster Villages” represent the very best alternative to energy generation for the immediate and foreseeable future.

Middle school teachers in local communities served by Touchstone Energy cooperatives could be provided with educational tools, including videos, CD-ROMs, a Teachers Resource Guides, student activity books and other collateral materials – all at no charge –being subsidized by the “Solar Tower Cooperative Investment Alliance,” Under the Get Charged! program, to enhance the existing curriculum.

Touchstone Energy launched the Get Charged! program, ” …to give students a real-world understanding of electric power, and the important role electric cooperatives play in delivering the “juice” that runs their everyday lives.”

As almost every professional in education knows, Discovery Channel School products are developed by the world’s most respected individuals in television and multimedia and they are recognized by most leading educational groups for excellence. One of the reasons “Solar Tower Cooperative Investment Alliance,” has approached directors and associates of Discovery’s award-winning programming is that much of its content, the curriculum and materials used in the Get Charged! program were developed specifically by Discovery Channel School for classroom use. All curriculum and materials comply with National Science Education Standards. The Get Charged! program represents a first-time partnership for Discovery with a non-educational entity to provide content directly to schools and “Solar Tower Cooperative Investment Alliance,” hopes to lend it’s support and knowhow to the ongoing initiative.

“Lots of kids (and most adults) are still in the dark about sustainable and alternative energy,” says H.Alfred Goolsbee, founder of the AEldwood™ Global Group of Companies and the “Solar Tower™ Renewable Energy Alliance of America” (aka-The STREAM Coop http://www.solartower.coop); “We would be delighted to partner with Touchstone Energy Cooperatives and Discovery Channel School to help get kids energized about sustainable futures and non-polluting sources of electric and hydrogen power.”

About the STREAM Coop:
America’s waste, and the world’s waste, can be converted into 100% Clean Green Electricity and Hydrogen Fuel for use in fuelcells.

“Solar Tower Cooperative Investment Alliance,” a 3.6 billion dollar global energy and agricultural cooperative initiative, is set to expand development of Solar Tower technology throughout the world. Solar Tower technology is not patented, and this large-scale renewable solar based energy technology is capable of generating enough hydrogen fuel and electricity to supply cities the size of Los Angeles and Houston. Development of this technology is currently underway in Australia, however, it is important to note that anyone can and should research, design and build Solar Towers™. You can “Save the Earth and Make some money while you’re at it!™”

Today, even as you read these words, the large majority of America’s household waste is being hauled to landfills and dumped into old rock quarries and other rural and desert areas. This waste, for decades, has been leaching into the water tables and poisoning the Earth; poisoning the fauna and flora, and in many cases it poisons human children, their parents and grandparents.

Average householders and business owners, believing that they have no other option, continue to pay a monthly fee and support this contemptible behavior. Every day they say goodbye to valuable recyclable waste and they say goodbye to their money, never knowing what happened to that money (or waste). What exactly does happen to that money? You will be shocked at the truth.

Hundreds of Millions (billions) of dollars of profits “disappear” every year; meanwhile the waste piles higher and higher. Where does it go? Who will bring these environmental criminals to justice? It may never happen; but The STREAM COOP can do something to prevent it from happening in the future. Pay attention: Your life literally depends upon your ability to understand what you’re about to read here and your eagerness to take action.

The new STREAM COOP Recycling system designed by H.Alfred Goolsbee, founder of the “Solar Tower Cooperative Investment Alliance LLC” will redirect over 85% of that waste into recycling centers and promises to reduce dramatically (by 80~95%) the waste that is usually bound for landfill, and alternatively, will convert that waste into money.

Over time these funds will be returned to those who produced the waste, proportionately, depending upon their active participation in the STREAM Cooperative.

It is the first time in history that a system promises to return cash for waste on a National Scale while at the same time reducing the mountains of waste being injected into Mother Earth.

This is made possible through two new simple systems of sorting waste; first at source, where the waste is generated, next at the STREAM Cooperative Recycling centers, where the waste should be hauled to instead of landfills.

STREAM Recycling units pay for themselves within two years and will employ hundreds of thousands of people, while returning a profit to the members of the cooperative over a period of several years.

In addition to these astounding benefits, the STREAM Coop Initiative promises to accelerate dramatically the Global transition to a Distributed Fuel Cell Economy (http://www.dfce.com) based on eventual (next 5 years) production of Hydrogen Fuel (and other sustainable fuels) produced as a direct and indirect result of this recycling procedure.

The STREAM Coop, through it’s unique and innovative recycling methods will generate member’s equity over a period of 3-4 years, as well as large quantities of powdered glass, aluminum, iron as well as non-toxic biomass (for reforestation). These assets will in turn be used to build The STREAM Agricultural Glasshouse Cooperative.

America’s waste will be converted into 100% Clean Green Electricity, Hydrogen Fuel, methanol and desiccated compost for use in reforestation projects.

The byproducts include forests, oxygen, distilled ionized water (negative charged, converted from ocean water), medicinal and aromatic herbs, tinctures and extracts, fruits and vegetables, and will generate hundreds of thousands, if not millions of employment opportunities for both skilled and unskilled labor at many levels.

If you wish to become a member of The STREAM Recycling Co-op today, and contribute your fair share of household waste as soon as possible you should contact us at mailto:stream@solartower.net. Become a local or regional co-op leader today and help us all to protect all our children’s (and the Earth’s) right to a clean green sustainable future.

Solar Tower technology is not patented, and this large-scale renewable solar based energy technology is capable of generating enough hydrogen fuel and electricity to supply cities the size of Los Angeles and Houston. Development of this technology is currently underway in Australia by EnviroMission Limited, however it is important to NOTE* that anyone can and should research, design and build solar towers.

There is no exclusive license required to develop Solar Tower renewable energy technology in Australia or any other place in the world. No patent was ever granted to EnviroMission Limited or to SolarMission Technologies regardless of their relationship with Schlaich, Bergerman und Partners in Germany. Nor was a patent ever granted to Schlaich, Bergerman und Partners in Germany, the original “inventor” of the “Solar Chimney” as they called it. (Re: http://www.sbp.de)

There is no Government approved owner of a Solar Tower™ patent in the US, China, Mexico, Jordan, Egypt, Sri Lanka, India, Pakistan, Vietnam and Thailand, or any other place in the world; therefore SolarMission Technologies’ plans to build on EnviroMission Ltd’s progress through commercialization of the technology outside Australia, should be complimented by several cooperatively owned and operated groups of Solar Tower Turbine Clusters™ situated around the world.

A search for a suitable location in the US has already been conducted and enthusiasm for the implementation of Solar Tower Turbine Cluster™ technology in Arizona is evident. The Phoenix Rotary, (http://clean-air.org/) among others, has already expressed their support for the project when they sent a letter of encouragement (see below*) to the founding members of The STREAM Cooperative and other members of the NASA Ames research center on June 20th 2003 when The First Exploratory Meeting of The STREAM Cooperative at NASA Ames Research Park occurred. (view image at:[Enviromission EarthNews Online http://www.enviromission.com)

Along with: Professor Daniel Kammen of the Renewable & Appropriate Energy Laboratory “RAEL” (see- [http://socrates.berkeley.edu/%7erael/testimonies.html) of the University of California Berkeley several key figures of the NASA team were in attendance:

Solar Tower Renewable Energy Alliance of America LLC, (aka The STREAM Coop) and it’s work to date, worldwide, has provided the project with the groundwork to effectively thwart attempts to monopolize this critical new source of energy and to insure clean green energy for future generations at affordable costs in any global energy market.

A Solar Tower Turbine Cluster™ power station is expected to abate over 7,000,000 tons of greenhouse gases annually, providing an important solution to the renewable energy challenge in the US.

“Save the Earth and
Make some money while you’re at it!™”